An update on the 2012 Regional Health Profile was shared by Dr. Aurora Daluro of  Department of Health, Region V during the 5th Regional Health Research Coordinating Council on ------ 2014 at the Bicol University, Legazpi City.

Also significant is that Camarines  Sur achieved 60% fully immunized children in 2012 which  had deteriorated to Negative 14.16%.

Looking further at the columns under the Infant Mortality Rate, Naga City exceeded the target for immunization, however the IMR went up from15.05 to 15.89. In Iriga City, the achievement in immunization shows a significant decrease in the mortality rate from 13.5 to 5.15/1000 live births. On an overall the Bicol Region neither reached the target; The Region had tripped to negative 5.67%. There is a dire need to look into the  reasons for the said performance, considering that the vaccines  are given for free by the DOH.

On the Maternal side, the target in 2015 for  Maternal Mortality rate is 52/100,000 live births. The performance shows that Camarines Norte (46.78), Naga (51.24) & Legazpi City (51.81) achieved the target with Cam. Norte having the highest achievement. The lowest achiever is  Catanduanes, whose MMR is 150. With the implementation of the Basic Emergency Obstetrical and Newborn Care (BEMONC), researchers are encouraged to investigate the reasons behind the results. The data presented can be  used by researchers in coming up with research proposals to be submitted to the consortium for funding. 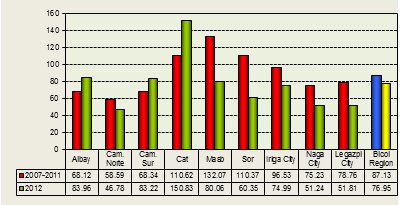